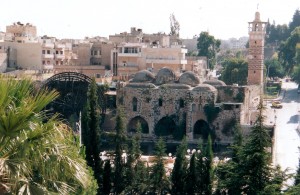 Today’s New York Times carries a story about the Syrian President’s carefully polished image, courtesy of some very expensive Western PR. As well as the notorious Vogue feature on his British-born wife, there are surprisingly many flattering portraits of this most brutal of dictators. Although the horrifying events of recent weeks have been widely reported, it will take time to erase the carefully crafted, wholesome image of this glamorous couple. The NYT article quotes Andrew Tabler, a Syria expert who once worked for a charity sponsored by Mrs. Assad, explaining the appeal of the President and First Lady thus: “He speaks English, and his wife is hot.”

The article reminded me of my visit to Syria in 2003. At first glance everything looked normal. There were no public protests, no opposition marches and no tanks in the streets. The only unsettling things were the huge billboards covered with images of the president: here in an army uniform, there in a business suit or with his wife and children. Every shop and café had a photo of him on the wall. He smiled benignly on his people, the new young president. Sometimes he stood beside his father, the former president, Hafez. Then they were both smiling. People were desperate to chat, to practice their English. Women watched me from behind their headscarves, and when I smiled, they smiled back. Children waved and rushed up to me, not to ask for anything, just to meet, to say, “Hello, how are you? What is your name?” Conversation was complicated, and took place only in large open spaces with nobody close by. On the pretext of taking photographs I separated myself from the crowds and asked careful questions of those who hung around, obviously eager to find an audience. Could they listen to international news? No, it was censored. Could they access the Internet freely? No, it was blocked. Was there politics taught in school? Yes, all students had classes of political indoctrination. What did they think of America? Wonderful!

There were almost no other Western tourists in Syria that summer. Souvenir shops were empty, cafes were closed and everywhere people were suffering because their only source of income had disappeared. Hotels were operating on a skeleton staff and many people had lost their jobs. As I drove into Damascus, alone in a taxi, the driver pointed up to a brutal, heavily fortified building on the hill: an unmistakable piece of fascist architecture. “If you are a murderer you can be out in a week. If you criticize the president you can be there for life.”

Hama is a beautiful small town in the Orontes Valley, famous for its huge water wheels, or norias, which are used to feed the fields and fill the aqueducts. Their grinding, creaking and rhythmic groaning creates a soon unnoticed soundtrack like the whirring of cicadas. My memory retains a tranquil picture of a traditional town, where every woman wore a headscarf and loose topcoat, and every person waved and smiled. By night it was a dim, quiet city: by far the loudest noises I heard were the call to prayer and the sounds of the swallows swarming at sunset. There were peach, pomegranate and citrus orchards and gardens of flowers made possible by the plentiful water. I stayed at the Cham Palace Hotel, which was almost empty. In the evenings I swam alone in the pool in the garden. From the water I could see the weathered domes and dappled tile-work of the mosques and minarets of the old city.

On the plane home I talked to the man sitting next to me. This is what he told me about Hama: In 1982 the city, Syria’s fourth largest, with a population of 350,000 people, was destroyed on the president’s orders. Aerial bombing cut the roads so that nobody could escape on foot. The army surrounded the city and started shooting. Bulldozers and tanks followed, and then, to be sure that there were no survivors, cyanide gas was released. The old city was razed. Between 10 and 20,000 people were killed. In a case study of political violence, Hafez al-Assad, the then President, had ordered the attack against the Muslim Brotherhood, a group of Islamic insurgents inspired by Iran’s 1979 revolution. His aim was to teach a lesson for generations. Every family in the city lost someone. Exactly as he intended, it spread terror throughout Syria, and was barely reported elsewhere. What I had thought was the old city was in fact a complete reconstruction, distressed and pre-aged to fool the tourists. My hotel, with its swimming pool, was built on the mass graves of one of the neighborhoods.

This is why global education matters. The accurate representation of reality is too important to be left in the hands of market and profit-driven media. Some voices in the press are expert, brave and impartial; more are naive or careless; a few are being paid to misrepresent. How are young people ever to understand the world that their taxes and votes shape if they do not learn at school?

The best education in the world is one where children with different histories learn together side by side. There’s no better example than the family of United World Colleges which turns out outstanding, compassionate graduates year after year, many of them years older than their age-cohort because they started life as refugees. If we start seeing the world as a classroom, unfolding events as lesson plans and those who have lived life on the ground as teachers, then we will educate a generation of young women who will scoff at the idea that being “extremely thin and very well-dressed,” is more important than standing by whilst your husband orders the slaughter of children.