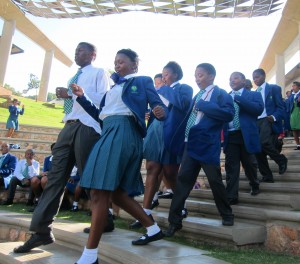 Often the discovery of natural resources can feel like a curse, but last year I was at the opening of a school that proved the opposite can also be true. Lebone II was built with the riches of the Royal Bafokeng Nation and a vision that’s all about people.

Perched on the edge of the wind-sculpted hills of South Africa’s North West Province, even the location of the school is significant: this is the site of the traditional ceremonies to initiate young people into adulthood. The red earth and brilliant blue sky are incredibly beautiful, but the view also includes the smoke from the platinum mines, source of the Bafokeng’s enormous wealth and some 80% of the world supply. It’s a constant reminder of the responsibilities for the next generation. In return for a world-class education these young people will be expected to stay and build their nation – and there’s a lot of work to be done.

Chances of success are greatly improved by the leadership of their dashing young king, Kgosi Leruo Tshekedi Molotlegi. Helicopter pilot, architect and owner of a knee-weakening smile, he personally chose the site of the school (after flying over every inch of his kingdom) and the winning design for the buildings. Although he never expected to rule, when faced with the deaths of both older brothers, he took on the role and their legacy with inspiring passion. He is exactly the sort of king, queen, president or prime minister the world needs more of – and a dazzling role model.

The product of an ‘English’ African education, Kgosi Leruo is determined that Lebone II will be African African. The dappled heart of the school is a central amphitheatre that mimics the traditional African meeting space under a tree – with the shade provided by a stunning chain-mail roof. Around this are classrooms and labs, each built for teaching both children and teachers. Observation areas have been discretely built in, and every classroom has been decorated on a budget of nothing – with student work, scrounged movie posters and colour charts left behind by the painters. This is not a posh boarding school for the elite, but a buzzing hub for sharing best practice. Lebone is connected to 45 partner schools and workshops are held every week for local teachers.

Everything about the school is underpinned by the Zulu word ‘ubuntu’, or its Tswana twin ‘botho’, roughly translated as ‘I can only be me because you are you.’ So the outreach programme, for which the school closes early every wednesday, is underpinned by the simple idea that “whatever we teach or learn here, we’re still people, and part of our community.” Placements involve visiting a prison, feeding the elderly, working with orphans or reading to the blind.

If this all sounds a bit worthy, then it’s time to meet the students, unmissable in startling blue and green uniforms. 70% Bafokeng, 30% from other southern African countries, they not only work hard but are armed with a devastating, infectious charm. Respectful to the core, they whooped and cheered as the lengthy speeches were followed by their teachers’ enthusiastic but shaky attempt at line dancing. Seconds later, at a signal from their leader, a blue and green flood poured down the steps of the amphitheatre in a joyful demonstration of how it’s done.

If platinum can do this, then I can’t wait to see what oil, coal, diamonds and shale gas can do.