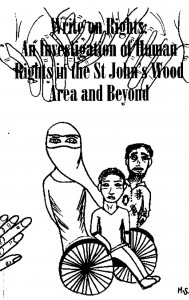 2 years ago I collaborated with an English teacher to design a Service /Community Learning program. Ours had a Human Rights theme, but it would have worked equally well focused on people with disabilities, the elderly or refugees. These are all sensitive issues; the trick is to give them a human face. Our inspiration was a highly-detailed map of our local community, produced by the UK Ordnance Survey, which also has a fantastic Digimapping package for schools.

Each Year 8 /7th Grade class had a map, and a set of pins. The project began with lessons on human rights, looking at the Universal Declaration and all the laws that require governments to act (the UDHR doesn’t.) They also studied definitions of Poverty, widely agreed to be the greatest human rights violation in the world today.

That done, their first task was to find and mark on the map every organisation that worked towards fulfilling people’s rights: doctors and hospitals, schools, churches, a homeless shelter, the police station, a library and a community centre. I’d established community partnerships with many of them the year before, so this was a powerful way to strengthen and extend those partnerships.

The next task was to divide the list up and research each one. For each organisation they identified a leader and made a note of their contact information. As a class, they drafted a letter inviting all the leaders to come to school to be interviewed – on a day we called Write on Rights Day.

The venue for the work now switched from advisory/tutor/form time, to the English classroom. The English teachers launched a journalism unit, with a particular focus on interviews. They studied examples, looked at the most successful techniques for extracting information and opinion, and started practising. In small groups they began deciding the best questions to ask each of the community leaders.

Invitations were emailed out and replies came in. A Friday afternoon was chosen and several parents roped in to bake cakes and man the teapots. Posters went up around school to let everyone know what was happening.

18 local community activists and leaders were interviewed that day – not only one of the most powerful and inspiring collections of role models you could imagine, but also a masterclass in leadership. Student photographers were hard at work. Detailed notes were taken, and for the next few weeks students worked on their articles. Once edited and peer reviewed they were gathered together and indexed. A small group of students then put in a grant application to the parent association, and a month or so later they got approval: the manuscript was sent to a local printer. Copies of the book were delivered to all the community partners.

One boy talked to a student from the neighbouring school about what it was like being in a school with lots of refugees:

I learned a label can mean a lot of different things. The word refugee is more complicated than just something like illegal immigrants. A student I talked to was a refugee from Kosovo and all these years later, he’s just a normal kid going to school.