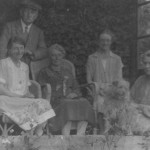 Last week I was privileged to be the keynote speaker at Global Issues Day at Ursuline Academy of Dallas. It’s a wonderful school and my audience was both fiercely well-informed and completely engaged. They asked fantastic questions.

I took as my text the words of Secretary of State Anthony Lake to the head of Human Rights Watch Alison Des Forges in the first weeks of the Rwandan genocide: She asked why he wasn’t doing more. He replied, “You have to make more noise.”

She asked why he wasn’t doing more. He replied You have to make more noise.

Making noise is one of the most important jobs human beings have. For democracy to function, for change to happen, for the rights of the weak and of minorities to be protected and for the preservation of those things that have no voice – those of us who can, must shout. We must drown out the sound of vested interests and entrenched hierarchies, of the profit motive and of fear of the unknown.

I showed a photograph of my great great aunts. There were five of them, and they had 2 brothers. One of the boys, my great great grandfather, was an alcoholic. The other was epileptic, which in those days meant he was unable to function independently. Both had the right to vote.

Their sisters, on the other hand, were extremely well educated, well travelled and bold. One went to Bogota, another introduced the Montessori system into Australia and taught the governor’s daughter; another was Matron of the Royal Free Hospital, and another the headmistress of a London school. None had the right to vote.

What did they do about their voicelessness? They became suffragettes. Not the chaining yourself to railings, starving yourself in prison and throwing yourself under the king’s racehorse sort, but the making mountains of Turkish delight and coconut ice to sell at fetes sort, the marching through the streets wearing the purple, green and white sash sort, the making public speeches and rallying the troops sort. They were part of the no- longer quiet majority who gave one another the courage to keep singing when society condemned them as monsters.

And as Emmeline Pankhurst, one of the bravest of the Suffragette leaders said

In 1994 as the killing in Rwanda escalated, we didn’t raise our voices because we didn’t know anything was happening. We rely on the press to tell us these things, and they didn’t. Perhaps they thought we didn’t want to know: it was too far away, too complicated. Perhaps they didn’t know themselves. As a result, thousands of us who might have jumped to our feet and started to shout, didn’t. And nearly a million men, women and children died.

Citizen journalists are beginning to change the story, as are outstanding news organisations like the Pulitzer Center, which funds journalists all over the world to tell untold stories. But so too is something else:

At last young people are being educated to know about the world; to find their passions, to understand who they are and what they care about. They are being taught  to ask questions, to find out for themselves and not to take no for an answer. They have powerful role models from all over the world, opportunities to see for themselves, and real experience of what they can achieve if they choose to.

Ursuline girls were among the millions of young people who rose to the challenge of Kony 2012. They raised tens of thousands of dollars and sent 2 students to Uganda to see how it was spent. I spoke to one of those girls, and her eyes shone. She couldn’t wait to go to college and then, maybe, back to Uganda one day.

To the rest I said this: The luckiest people in the world are those who have something they care about. School is the place to start looking. When you’ve found it, fight for it. And make lots and lots of noise.