In 2011/12 I designed and taught a monthly seminar on Invisible London. 10 students and I met for 2 sessions each month, one an informal seminar, the other an off-campus experience. We began by mapping our neighbourhood, establishing who lived there, and how. This gave us our monthly themes, which included: law and order, immigration, health, education, poverty and gangs. Local experts were invited to each session.

The most impactful session was on homelessness: a seminar co-led by a young man who had been homeless in London for several months and a local government housing officer, followed by a walking tour of the East End of London led by a guide who had been, and was again, homeless.

This seminar will run again in 2012/13, this time, directed by the unanimous feedback of the class, with a student group drawn also from the neighbouring state school.

I also ran a version of this seminar as part of a school-wide experiential education week. Each day we went to a different part of London and focused on a different theme.

I enjoyed the interactive atmosphere, and how the content of the seminars changed every week. We really got a diverse perspective into London and each week was a huge eye-opener for me. It’s not often we get to engage in intellectual and relevant discussion outside the classroom – that is what many of us enjoyed most.

I’ve yet to meet a young person who couldn’t be drawn in by this work, their curiosity piqued by the mystery of the unknown, their brains and hearts engaged by the stories they uncover. They don’t even notice that they’re collaborating, problem-solving, thinking critically and analytically, being creative, storytelling and developing their communication skills..

The way I see the local community changed a lot. I never thought that there were people living so close to my house that needed so much help. 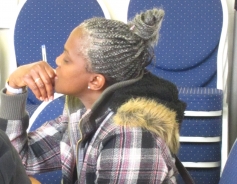